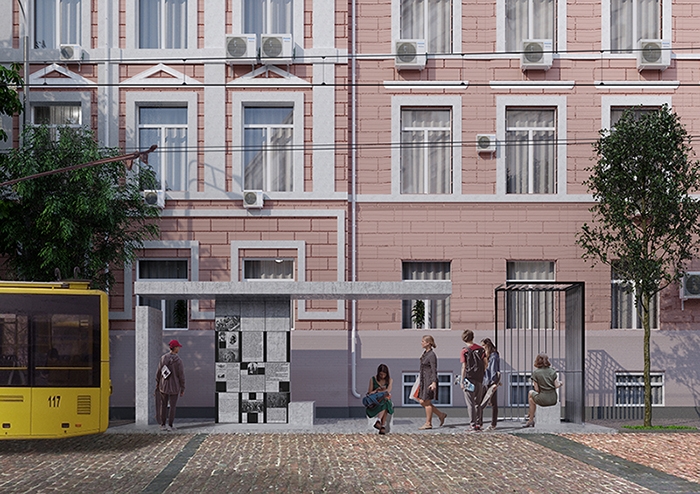 “Beilis affair” refers to a resonance lawsuit accusing a factory clerk of Jewish descent Mendel Baileys of the ritual murder of an orthodox boy Andrey Yushchinsky. The case became widely known not only in Kyiv and Russian empire but also worldwide. The process was accompanied by an active anti-semitic campaign and supported by a number of extreme right-wing politicians and officials. The trial took place in 1913 and lasted for two years until the jury claimed that the defendant was not guilty.

For the project, Zvyagintseva chose the form of a public transport stop, placed near the Pechersk district court, where Beilis was tried. The own associations of Beilis' trial, such as notions of time, information, corporeality, and judgment, the artist transformed into the forming elements: white paper sheet, plan of a courtroom, jury trial, courtroom cage, modular greed of a newspaper, and glass.*

The fragment of the defendant's cage is recreated in the corner of the public transport stop. Despite the fact that Beilis was not put in such a cage, it is still widespread and may be concerned as a violation of human rights and runs counter to the presumption of innocence.

By taking place at the benches for sitting, which direction is not the road as usual, but the cage, the visitor finds himself in the positions of both defendant and jury. The seatings provide the only angle of view to the side where the public transport arrives. Beilis was waiting for the consideration of his case, as the trial dragged on. So waiting for transport will overlap with how long people wait for their cases to be processed.

Concrete supporting structure has newspaper modular grid shape developed by designer Aliona Solomadina , which contains the materials on Beilis affair. Everyone, who is waiting at the bus stop, has an opportunity to get acquainted with archive materials, examples of innocently convicted people, materials about similar modern affairs, and empty places that are still to be filled. The sidewall of the construction repeats the composition of the modular grid, but made of such materials as dusty and cracked glass, it gives another perspective to the distortion of the information we perceive.

The sidewalk territory of the court is transformed into a white plane with graphic signs from both sides. The first one schematically reconstructs the elements of the judicial sitting with the particular place for each participant including advocates, judges, the defendant, etc. From the other end of the plane, the same plan of the space is changed beyond recognition – the drawing is nearly collapsed and the elements have changed their place. By passing the way the court itself may be rediscovered as a clear and open form of conflict resolutions.

*Not all the elements of the initial conception will be implemented, as the projects underwent changes at the various stages of realization. The forming elements of the final project are: white paper sheet, jury trial, courtroom cage, and modular greed of a newspaper.